“This is what annoys me most about vegans – when they want to try and stop me eating bacon. I mean… it’s bacon! Perfectly cooked, sandwiched between two slices of white bread, with a dollop of brown or red sauce… the smell, the taste… it’s making me hungry just thinking about it! I don’t want to know why it’s so bad and I don’t much care. Leave me with the holy grail, the splendour… me and my bacon.”

I’ve heard this kind of thing said so many times, and, I understand it. Completely. If you’ve been doing something you enjoy for all of your life, the very last thing you want is for someone to come along and tell you why you shouldn’t do it anymore. Firstly, it’s annoying. Secondly, it would be a pain in the arse having to change. Thirdly, you love it – so why the hell should you?!

Imagine you had grown up being told that the world was flat. You read news articles, you were told by teachers, you saw pictures – you’d believe that the world was flat, based on everything you’d experienced so far. Next thing, Dave comes down the pub saying he’s been talking to some astronauts who have shown him some video footage of Earth from space and it turns out “the world is only bleedin’ spherical!” You’d laugh at him at first, tell him you’re too busy to hear this shit, and carry on drinking your pint…

I discovered this brilliant practical joke someone played on unsuspecting members of the public that perfectly highlights the power of great marketing, the power these organisations have to keep us disconnected and the hell that breaks loose when you crash reality into our comfortable disconnect!

Every single person tries to stop him when their perception of reality drastically changes. The ‘hidden’ is now in sight, the ‘disconnect’ becomes connected, and the ‘comfortable’ no longer feels so good.

What changed? Perspective. The ‘piece of sausage’ wasn’t just a piece of sausage anymore. It wasn’t just a product. We saw a soul, a personality – and suddenly it was no longer okay. And even though somewhere in the back of our minds we know that sausages and bacon come from a living, breathing animal, we lock that away and prefer to accept marketing images of happy, free-range pigs running around in green fields, looked after by friendly farmers that perhaps we know one day send their beloved pigs to be killed, but painlessly, right? And then we create a huge void between that and the nice sausage and bacon products we buy from a supermarket. It’s easier to do this, and it makes us feel happier. Disconnect is convenient.

But what if we don’t just accept what we are told by these companies? What if we feel there is more to it? What if we are now curious about that void and want to know more? What if we want to broaden our view and see more of this picture before we make a final assessment… ?

We all know that pigs are incredibly intelligent animals, they have good long-term memories, they’re social and affectionate, and can distinguish between pigs they know and pigs they don’t. They love to play, and they love to have their bellies tickled. They sense and see what is happening around them.

What we tend not to think about is that regardless of whether pigs are factory farmed or free-range (90% of pigs in the UK are factory farmed), they all end up at the same slaughterhouse. The industry then tells us that the ‘most humane’ method of slaughtering these animals is by gassing them, and want us to believe that this means they gently fall asleep. This is a comforting thought, but nothing could be further from the truth.

As soon as an animal enters a slaughterhouse they feel the fear and smell the death. Pigs are forced into gas chambers, and these animals are often so frightened that they refuse to enter and try to run away. As a result, they are then prodded and shocked with electric prongs until they move.

The gas chambers are then lowered, and filled with carbon dioxide. The carbon dioxide reacts with mucus coated membranes (on eyes, nostrils, sinuses, throat and lungs) to form carbonic acid. From their first lungful of gas, these pigs are burning from the inside out. They scream, gasping for oxygen, and thrash around, flipping themselves upside down in mental and physical anguish, struggling in agonising pain until collapsing unconscious.

Then they are hung up by their feet, to have their throats slit, and left to bleed to death. Sadly, some pigs are still somewhat conscious when this happens, writhing around in further agony whilst their blood, and life, drains away from them.

Gassing is how most UK supermarkets specify slaughterhouses must kill pigs as it’s considered the ‘most humane’ method. But I don’t want to just read about it – I want to see it for myself, to broaden my current perspective and make my own assessment. So I watched. And then I watched many times more. I watched how they do it in Australia, in France, in England. Turns out they’re all much the same. I’ve given a link below, showing a short 2 minute video of how this works. And this is by far one of the tamest versions I’ve seen:-

I was in Marks and Spencer shortly after watching the above, when I saw these cute sweets marketed at children. They had a happy cartoon pig on the front called Percy Pig, and the bag was filled with smiling pig faces, all joyful and fun. And then I looked at the ingredients… they contained real pig in the form of pork gelatine. Suddenly the concept of this made my stomach lurch and it hit me like a ton of bricks just how powerful marketing is, how it paints this happy, rose-tinted picture to keep us distracted from the horrifying truth. 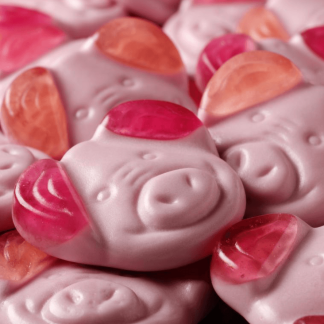 “Animals go into the slaughterhouse alive and terrified, and come out chopped up into pieces. And people like to think something humane happens along the way.”

My friend, the Anticarnist visited a slaughterhouse as pigs arrived to be killed, here in the UK. This is how they described the experience:

“Last Monday I stood outside a slaughterhouse awaiting trucks packed two and three levels high with pigs headed for the gas chambers. People ask me why, but if these trucks were filled with six month old puppies they would likely do the same. The only difference between the animals you love as pets and the animals you love to eat is your perception.

As we calmed them down they were so curious and gentle. Around the back of the slaughterhouse a few minutes later you could hear their screams as they were literally burned from the inside out by the gas. Eerily followed by a silence as they were chopped up and dismembered, all in the name of a bacon sandwich.

I’m so sorry I couldn’t save you.”

So okay, now I know what happens at the slaughterhouse, now I know how these organisations are keeping a tight lid on it, I understand how marketing is doing a phenomenal job at covering all this up and letting people believe it’s all happy pigs and smiling faces… but maybe I’m overlooking something. What about before the slaughterhouse? Are the pigs having a lovely, albeit short life?

That’s when I started to read about tail docking, castration and teeth clipping… all done without pain relief. About dark sheds and dying babies, about mothers in metal crates and crippled animals unable to stand. Surely this isn’t the case in most farms. Is it? And then I went to a talk given by Juliet Gellately about her undercover investigations at farms in the UK:-

And then? And then I got reeeeeeally fucking angry. How selfish we’ve become. How greedy and gluttonous we are to put our taste buds before the needless suffering and horrifying slaughter of other animals. I detest violence, but most of all I abhor the people who inflict violence intentionally and unnecessarily on the innocent, the weak and the vulnerable. For what? A snack?! We should be ashamed of ourselves.

We humans have decided that we are the most important species on this planet and that our lives are far more superior. We have justified this to ourselves, disassociated from the horror, and decided that fear, pain and suffering of a different species is okay, effectively pretending that this fucking atrocity, is really quite simply ‘the norm’. We look to where the marketing companies point us and keep looking that way ’cause looking anywhere else would cause significant personal inconvenience. 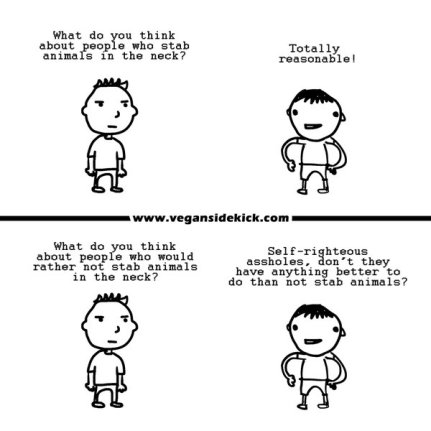 So no, individual perspectives aren’t wrong, it’s the only one you’ve been allowed to see. But when Dave comes into the pub saying he’s found something out, perhaps he isn’t trying to blame you personally for something, perhaps instead he’s showing you what is being hidden, perhaps he’s trying to direct your attention to where those organisations don’t want you to look.

The majority of people in the world are kind, compassionate souls who do not support animal cruelty, and only through disconnection and the power of distraction can these huge organisations get away with it. But once you start to see, once you start to hear, and once you start to feel that there is something very very wrong… you have a choice. As ‘Earthling Ed’ so perfectly put it…

There is a man beating a dog with a stick, and a second man walks down the road and sees the man beating the dog with the stick. The first man says “I have another stick, come join me and we’ll beat and kill this dog together.”

3. The third choice he can make is to say “I see what you are doing. What you are doing is wrong and immoral, and not ONLY will I not participate but I will actively intervene and stop you.”

I’ve made my decision. And I’ve reached the following conclusion. The ‘hidden’ is now in sight, the ‘disconnect’ has become connected, and the ‘comfortable’ no longer feels so good. The strong have a duty to protect the weak, and I am strong. It takes nothing away from a human to be kind to an animal. So I choose the third option. I’ll intervene and I’ll never turn a blind eye. And not ONLY will I never turn a blind eye, but I’ll stand up and speak out about it too.

For love. For compassion. For the animals.

P.s. The bacon used in the picture is vegan bacon. High in fibre and protein, low in fat and has zero cholesterol. Available fucking everywhere. Just google it. 🙂 ☮︎

Read ‘Why the fuck am I vegan? The downside they don’t tell you about…’<<<<< a href=”https://vegansupernova.com/2016/08/10/does-being-vegan-make-you-less-manly/”>’Does being vegan make you less manly?’These incredible t-shirts are available from the very talented Anticarnist.Com:-

3 thoughts on “What about bacon, though?”